The city of Curtea de Arges is located in close proximity to the river Arges, in the vicinity of the sub-Carpathian hills, which surround it. From a historical standpoint, the city is one of the most important places in Muntenia; its rebirth took place in 1990 and the tourists returned here for the two representative churches and for the medieval courtyard, famous landmarks here.

The city of Curtea de Arges is located in close proximity to the river Arges, in the vicinity of the sub-Carpathian hills, which surround it. From a historical standpoint, the city is one of the most important places in Muntenia; its rebirth took place in 1990 and the tourists returned here for the two representative churches and for the medieval courtyard, famous landmarks here.

The city is located in the northern part of Arges County, more specifically in the hilly dingle formed by the upper flow of the river with the same name, at 450 m above sea level, in the Getic Subcarpathians. The city is surrounded by the Subcarpathian hills and the hilly southern peaks of the Fagarasi Mountains, peaks covered with pastures and forests. The surface area of the city is approximately 75 square km wide; the presence of the mountains only 28 km away brings variation and diversity to the climate. The temperatures here are moderate throughout the year and the precipitations are abundant, due to the dingle in which it is located. 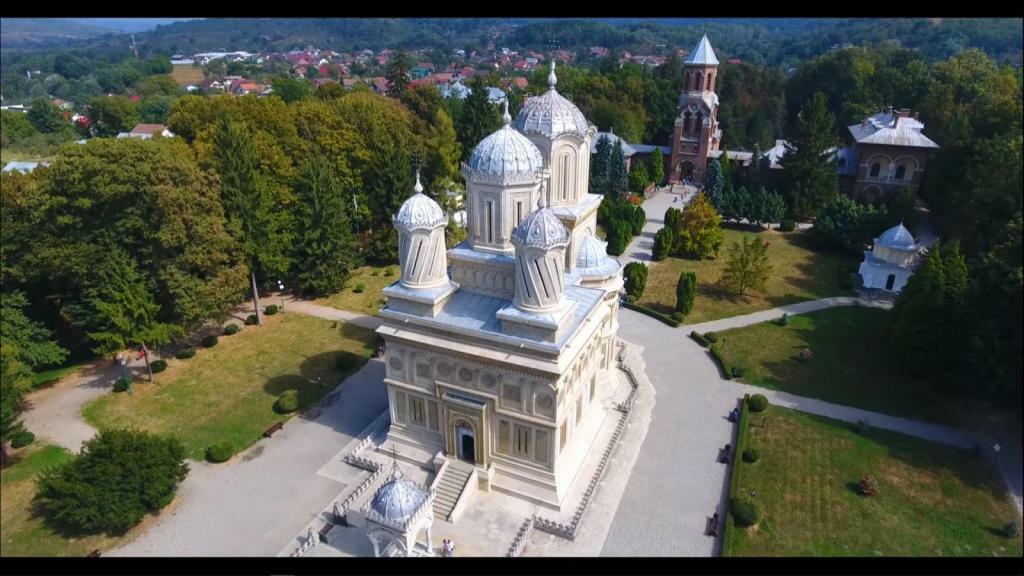 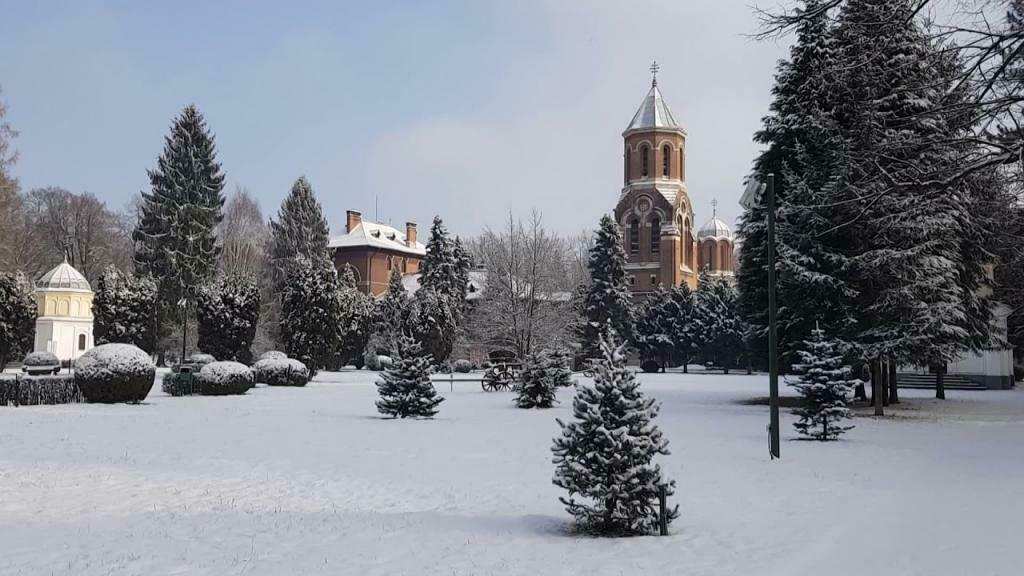 The winter here is a bit harsher than in the plains, and the summers are generally pleasant, with warm and sunny days almost all the time.
From a historical standpoint, the archaeological discoveries indicate that in the past there was a population of Dacian origin living here (since the first Iron Age), a population led by Dromichaites (between the 4th and 3rd Centuries BC). The archaeological excavations led by Nicolae Constantinescu revealed the fact that in the 1200s there was a small residence of a voivode here and a small church.
According to specialists, in the 13th century (around 1247), Curtea the Arges held the seat of the voivode Seneslau, ruler of a state formation, according to notes found on the diploma of the Knights of the Order of Saint John. Basarab the 1st united all the principalities and voivodeships from the Carpathians to the Danube under the name of Wallachia, thus becoming the first ruler of Wallachia between 1310 and 1330, until the battle of Posada. The first time that the city of Curtea de Arges was mentioned in documents was on October 17th 1336 under the name of “Castro-Argyas”; it is mentioned in a Hungarian diploma. Although the name it was known under was Arges, its present name began being used in the 16th century, mentioned for the first time in 1510.

The voivode Vladislav the 1st (also called Vlaicu, who ruled between 1364 and 1377) set up the first mint here; he encouraged commercial ties between Muntenia and the western cities. During the same time period, the first local school was set up here, for the children from the city.
PLACES TO VISIT IN CURTEA DE ARGES
• The Municipal Museum – north of the square located close to the main road
• The Royal Court – built in 1330 shortly after the battle of Posada; nowadays, what is left of the old Royal Court is well indicated by the exterior walls.
• Curtea de Arges Monastery – founded in 1517 and built out of stone.
• The Episcopal Church – it became the bishop’s residence in 1739. This is where the first two royal couples of Romania, King Charles and Queen Elisabeth and King Ferdinand and his wife Maria are buried.
• The Central Square 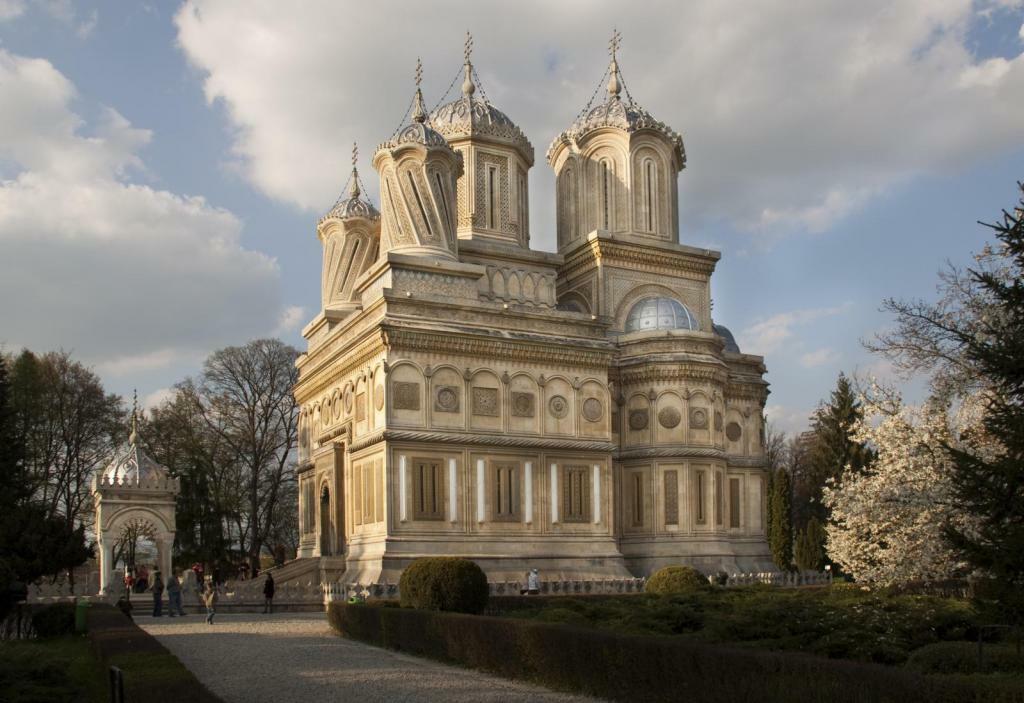 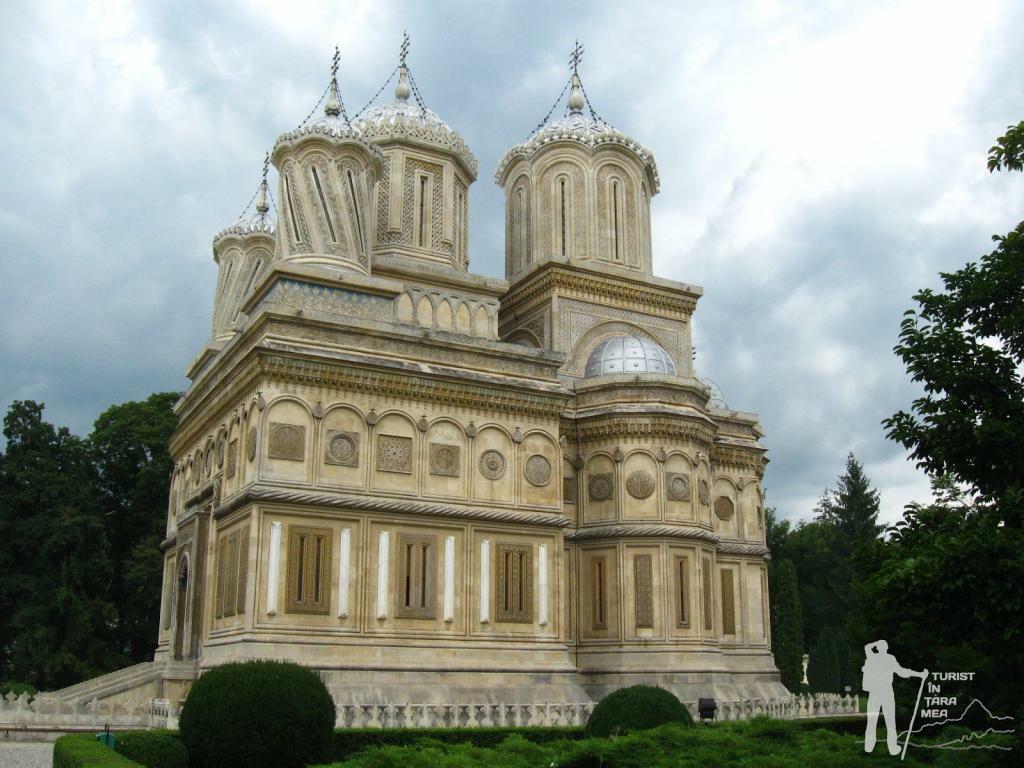 PLACES TO VISIT NEAR CURTEA DE ARGES
• Bradetu – the name means fir forest and, as the name indicates, the town is covered with mixed forests and is very appreciated by the tourists who come here to hike and relax, and for its sulfur waters. The town is 28 km away from Curtea de Arges, following the DN73C highway.
• The Wooden Hermitage in Bradetu – an orthodox monastery, a copy of the Cozia Monastery, dating back to the 18th Century.
• The Church of the Saint Peter and Paul Monastery – a church dug in a sandstone rock, located in the town of Corbii; if you want to visit the place after 4 PM, ask at the house located on the other side of the rock. Here you can find frescoes painted in the purest Byzantine style in our country.
• The House of Elisabeth Rizea in Nucsoara Commune
GOOD TO KNOWN WHEN IN CURTEA DE ARGES

A good day to visit here is on a Thursday, because that is a market day; the stalls in the central square are brimming with souvenirs, clothes and delicacies. After a visit and a shopping session in the market, visit Mrs. Mitrofan’s terrace restaurant, where you can admire the interior decorated in an authentic style of the year 1821 and the painted ceilings.
As landmarks, the city of Curtea de Arges is 38 km away from Pitesti, 36 km away from Ramnicu Valcea, 45 km away from Campulung and 150 km away from Bucharest. It is good to know that the city is an important point of departure towards the Transfagarasan highway, the Poenari Citadel, the Vidraru Dam and Lake and the Ocnele Mari salt mines.