Brașov is the largest city in a mountain resorts area.

Brașov is the largest city in a mountain resorts area. It is located in the central part of the country, about 166 km North of Bucharest. Brașov is surrounded by the Carpathians and is part of the Transylvania region. The old city is very well preserved.

The Black Church, one of the symbols of Brasov, is the parochial church of the Evangelical Church C.A. from Romania. The current name was given after the fire in 1689, that covered the entire city and turned the church into a ruin. Initially the church was named the Feast of Saint Mary. After the Reformation it was known as the “Great Church”, but the popular name after the fire, the “Black Church”, was officially accepted in the 19th century.

The Fortress was an important point of defense, located outside the city of Brasov. At the beginning of the fifteenth century, there was only a watchtower there, which was completed in 1524 with a wooden bastion with four towers. Destroyed in 1529 by the army of Petru Rares, in its place were erected, a quarter of a century later, stone walls and also carvings were dug. A fire in 1618 brought serious damage to it, so that in 1625 the fortress was almost completely restored. In 1627 an 81 m well was dug inside. In 1630, the citadel acquired the four bastions from the corners. 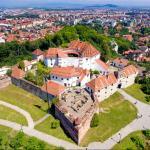 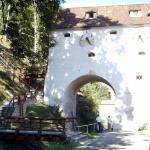 The Graft Bastion was built between 1515 and 1521 to ensure the communication of the defenders of the White Tower with the fortress. For this purpose it had a movable gate. Of rectangular shape, based on a thickness of about 4 meters, the fortification is provided with shooting holes with wooden clasps and casting holes.

The Blacksmith’s Bastion, with its pentagonal shape, located in the north-western corner of the city of Brasov, is built on three levels, provided with firing and bombing holes.
The shape of today’s bastion has undergone certain transformations over time. Initially, there was a tower that was destroyed in 1526 by the floods, after which it was restored. 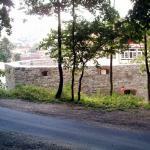 Catherine’s Gate in Brasov is one of the oldest, but certainly the most beautiful gate, which has retained its original appearance until today. It has been called the upper gate, the corpus Christi or the sanctae Katharinae, the last name is still used today. It is located right next to the Sichei Gate, and for several centuries it was the only gate that pierced the western walls of the fortress.

Șchei Gate is located near the Catherine’s Gate and was built between 1827 and 1828 with the role of fluidizing the increased traffic in this area. The construction is made out of stone and brick in a classic style, Șchei Gate is shaped like an arch with three entrances, a large main one in the middle and two shorter entrances to the left and right that are intended for pedestrians. 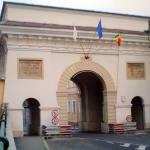